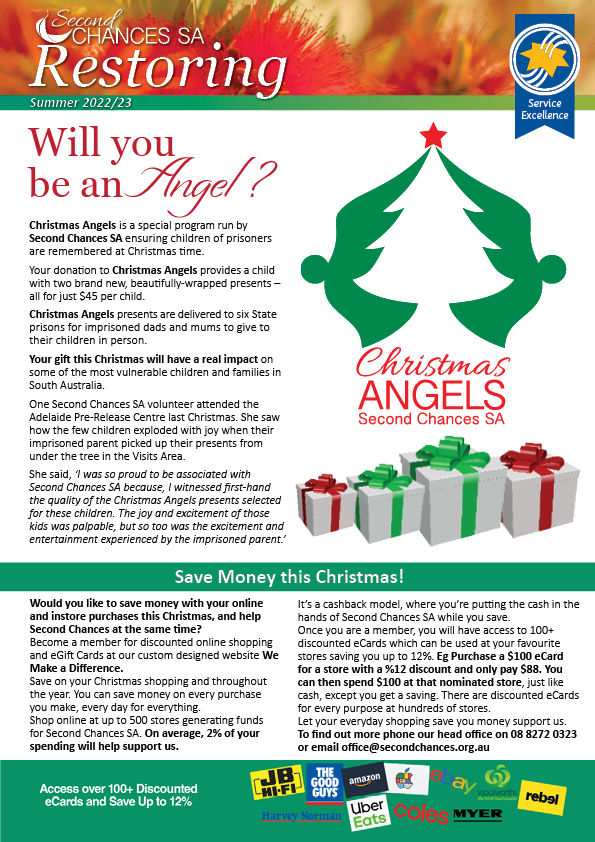 Summer is here! and Christmas is just around the corner.
Christmas Angels is a special program run by Second Chances SA ensuring children of prisoners are remembered at Christmas time.
Your donation to Christmas Angels provides a child with two brand new, beautifully-wrapped presents – all for just $45 per child.
Will you be an Angel and make a difference this Christmas? We are accepting donations for 2022 Christmas Angels until Christmas eve online

Have you got a copy of our Restoring Summer Newsletter? To get a digital copy click Download Summer Restoring Newsletter.
If you want to catch up on any previous editions go to secondchances.org.au/newsletters 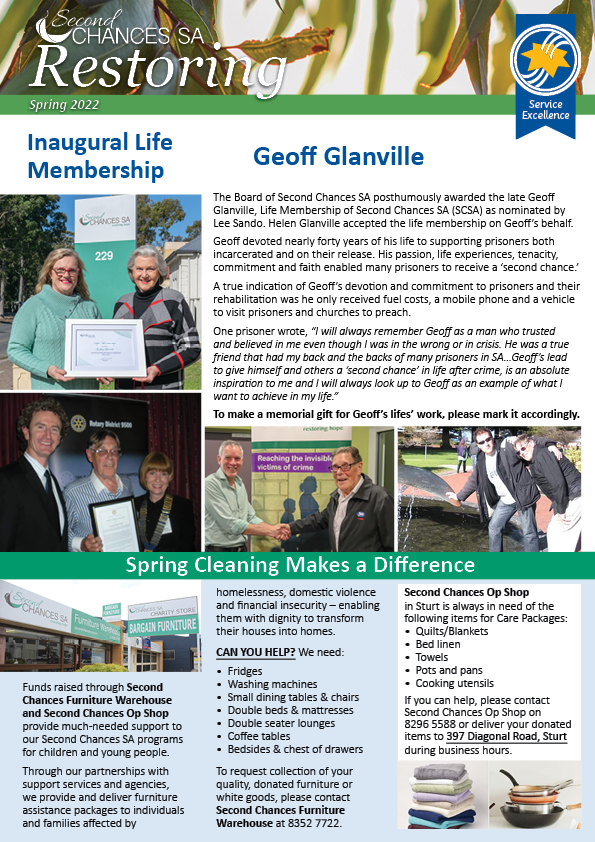 In our Spring edition of Second Chances SA Restoring we honour the late Geoff Glanville with life membership. Geoff devoted nearly forty years of his life to supporting prisoners both incarcerated and on their release. His passion, life experiences, tenacity, commitment and faith enabled many prisoners to receive a ‘second chance.’ 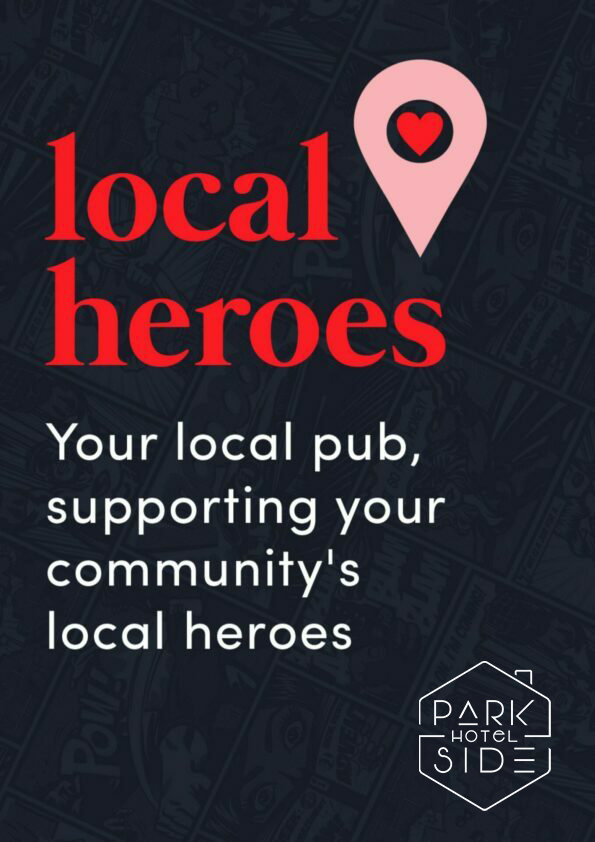 The Parkside Hotel are donating $1 from every chicken parmi sold on Wednesdays to Second Chances SA.

To book a table or for more info go to  https://parksidehotel.com.au/events/local-heroes-2/

The good people at the Parkside Hotel love their local community, and are committed to lending a helping hand to the Local Heroes who are doing amazing work to make it a better place.

They’re proud to support Second Chances SA, supporting people in prison, their children and families with a range of custom-designed programs to create brighter, better futures.

The Parkside Hotel are donating $1 from every chicken parmi sold on Wednesdays to Second Chances SA. 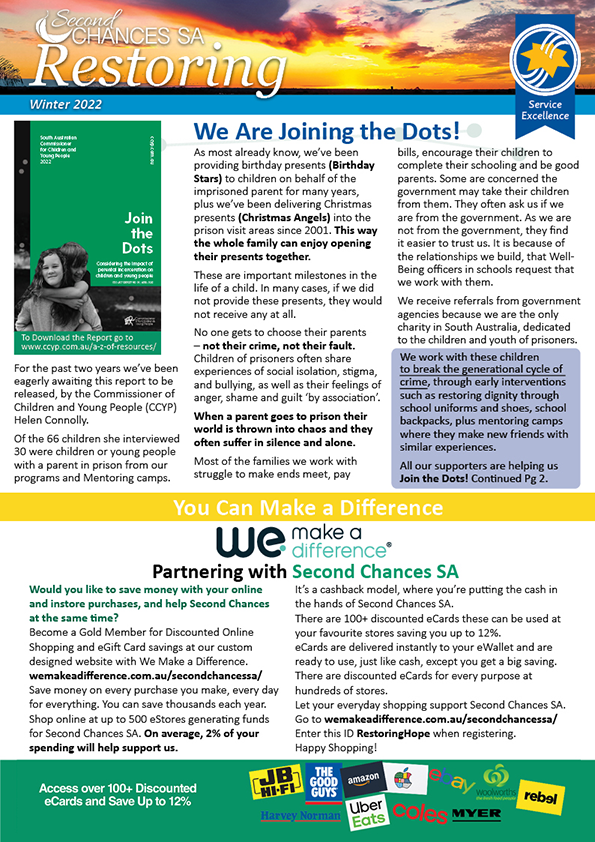 Winter is here and so is our Winter Restoring Newsletter!
In this edition we pay tribute to our founder and friend the late Geoff Glanville. To access the full Newsletter click to Download the PDF or for previous editions go to Restoring Newsletters.
‘Join the Dots’ is out. For the past two years we’ve been eagerly awaiting this report to be released, by the Commissioner ofChildren and Young People (CCYP) Helen Connolly. To read the full report (PDF) click here. 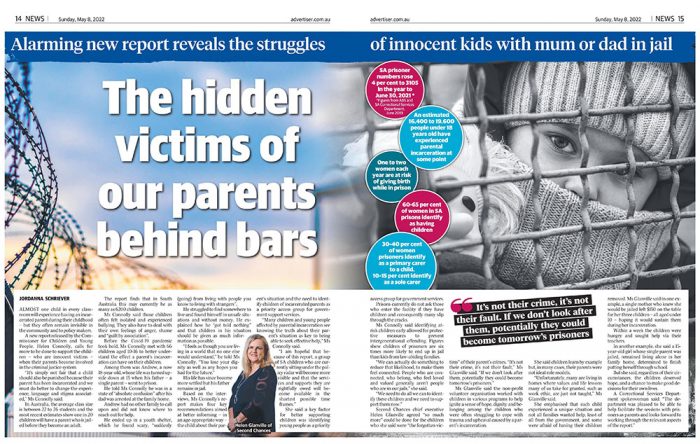 ALMOST one child in every classroom will experience having an incarcerated parent during their childhood – but they often remain invisible in the community and to policy makers.

A new report released by the Commissioner for Children and Young People, Helen Connolly, calls for more to be done to support the children -who are innocent victims – when their parents become involved in the criminal justice system.

“It’s simply not fair that a child should also be punished because their parent has been incarcerated and we must do better to change the experience, language and stigma associated,” Ms Connolly said.

In Australia, the average class size is between 22 to 26 students and the most recent estimates show one in 20 children will have a parent who is jailed before they become an adult.

The report finds that in South Australia this may currently be as many as 6200 children.

Ms Connolly said those children often felt isolated and experienced bullying. They also have to deal with their own feelings of anger, shame and “guilt by association”.

Before the Covid-19 pandemic took hold, Ms Connolly met with 66 children aged 10-16 to better understand the effect a parent’s incarceration can have on their children.

Among them was Andrew, a now 18-year-old, whose life was turned upside down at 15 when his father – a single parent – went to prison.

He told Ms Connolly he was in a state of “absolute confusion” after his dad was arrested at the family home.
Andrew had no other family to call upon and did not know where to reach out for help.

He ended up in a youth shelter, which he found scary, “suddenly (going) from living with people you know to living with strangers”.

He struggled to find somewhere to live and found himself in unsafe situations and without money. He explained how he “got told nothing” and that children in his situation should be given as much information as possible.

“I feels as though you are living in a world that no one else would understand,” he told Ms Connolly. “You lose your dignity as well as any hopes you had for the future.”

His life has since become more settled but his father remains in jail.

Based on the interviews, Ms Connolly’s report makes four key recommendations aimed at better informing – in an age-appropriate way – the child about their parent’s situation and the need to identify children of incarcerated parents as a priority access group for government support services. 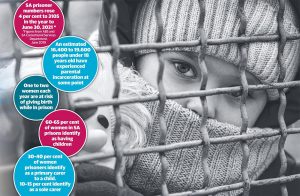 “Many children and young people affected by parental incarceration see knowing the truth about their parent’s situation as key to being able to seek effective help,” Ms Connolly said.

“I am hopeful that because of this report, a group of SA children who are currently sitting under the policy radar will become more visible and that the services and supports they are rightfully owed will become available in the shortest possible time frames.”

She said a key factor for better supporting children was identifying young people as a priority access group for government services.

Prisons currently do not ask those who enter the facility if they have children and consequently many slip through the cracks.

“We can actually do something to reduce that likelihood, to make them feel connected. People who are connected, who belong, who feel loved and valued generally aren’t people who are in our jails,” she said.

“We need to do all we can to identify these children and we need to support them now.”

Second Chances chief executive Helen Glanville agreed “so much more” could be done for the children who she said were “the forgotten victims” of their parent’s crimes. “It’s not their crime, it’s not their fault,” Ms Glanville said. “If we don’t look after them, potentially they could become tomorrow’s prisoners.”

Ms Glanville said the non-profit volunteer organisation worked with children in various programs to help ignite a sense of hope, dignity and belonging among the children who were often struggling to cope with trauma and upheaval caused by a parent’s incarceration.

She said children learn by example but, in many cases, their parents were not ideal role models.

“Unfortunately, many are living in homes where values and life lessons many of us take for granted, such as work ethic, are just not taught,” Ms Glanville said.

She emphasised that each child experienced a unique situation and not all families wanted help, least of all from the government, and some were afraid of having their children removed. Ms Glanville said in one example, a single mother who knew she would be jailed left $150 on the table for her three children – all aged under 10 – hoping it would sustain them during her incarceration.

Within a week the children were hungry and sought help via their teachers.

In another example, she said a 15- year-old girl whose single parent was jailed, remained living alone in her family home, determined to finish putting herself through school.

But she said, regardless of their circumstances, the children deserved hope, and a chance to make good decisions for their own lives.

A Correctional Services Department spokeswoman said: “The department was pleased to be able to help facilitate the sessions with prisoners as parents and looks forward to working through the relevant aspects of the report.”

Show your support for these children – the innocent victims of crime, by making a donation. Click the link below or go to our donate page. 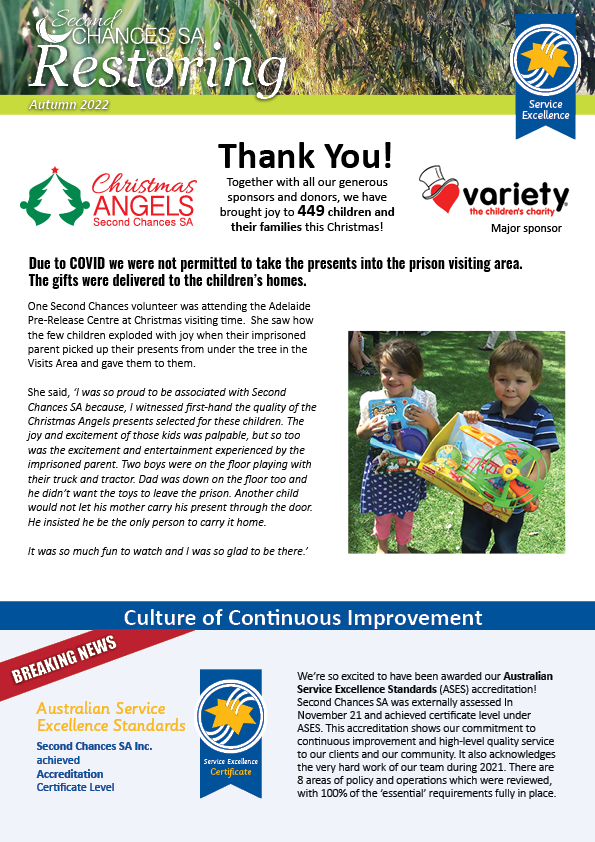 In our Autumn edition of Second Chances SA Restoring we are excited to announce we have achieved Australian Service Excellence Standards (ASES) accreditation! We also reflect on seven years as an organisation.
To read more click to Download the PDF or for previous editions go to Restoring Newsletters. 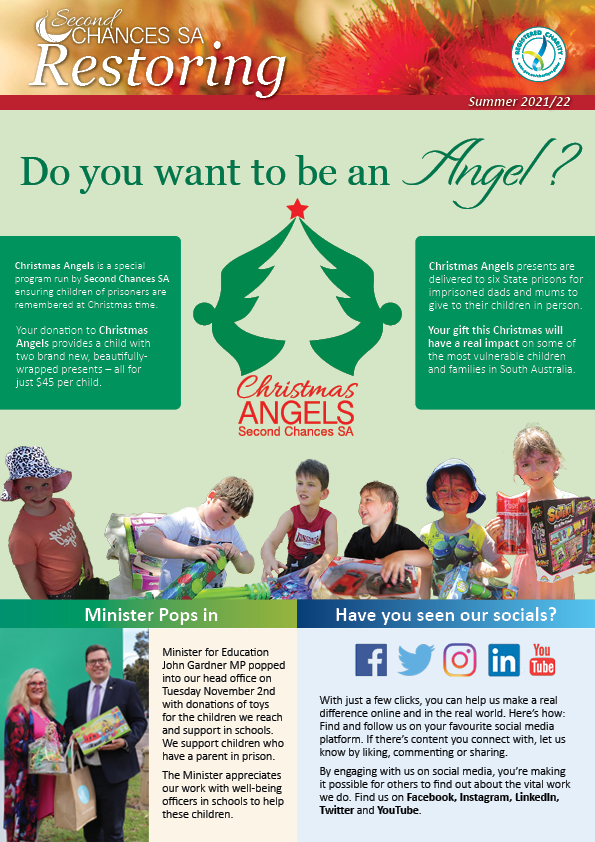 This Summer in Restoring Newsletter, we’re looking for Angels. Christmas Angels provides two brand new Christmas presents for an imprisoned parent to give their child. By donating to Christmas Angels, you will make their Christmas special. Together with your support of of $45 per child we will provide two presents to brighten their Christmas. We’re strengthening families, building self-worth and bringing joy to kids doing it tough.

Find out the latest news across our organisation by downloading the Summer edition of our Restoring Newsletter (PDF). 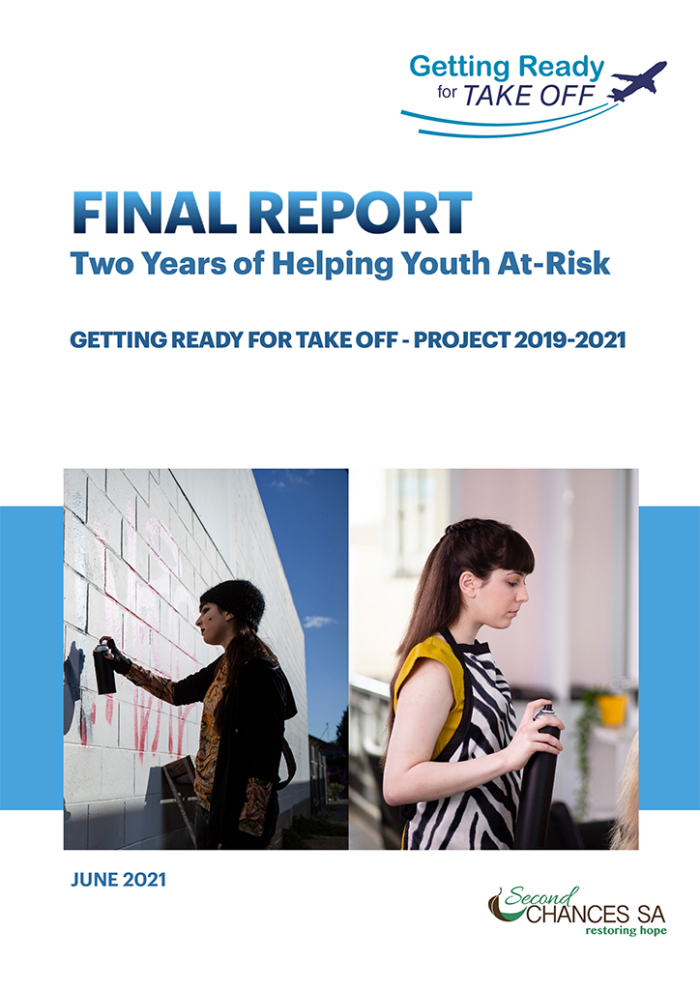 The Getting Ready for Take Off project aimed to break the inter-generational cycle of welfare dependency for young
people, aged up to 25 years, who have or have had a parent or guardian in prison. We
supported participants to develop a vision of their future, including a pathway to employment. END_OF_DOCUMENT_TOKEN_TO_BE_REPLACED 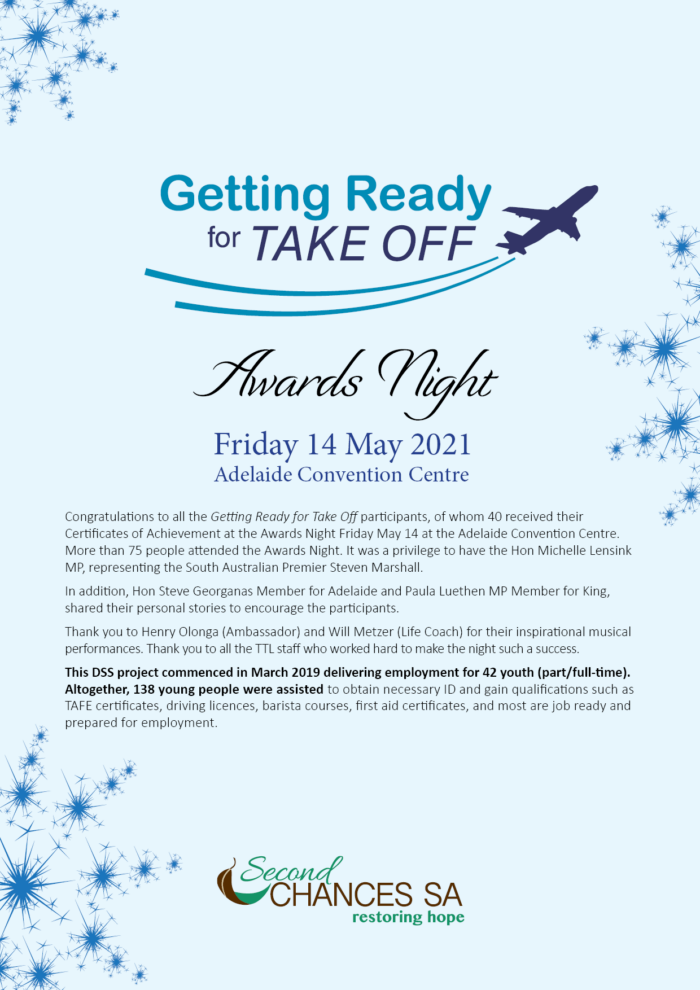 Congratulations to all the Getting Ready for Take Off participants, of whom 40 received their
Certificates of Achievement at the Awards Night Friday May 14 at the Adelaide Convention Centre. END_OF_DOCUMENT_TOKEN_TO_BE_REPLACED 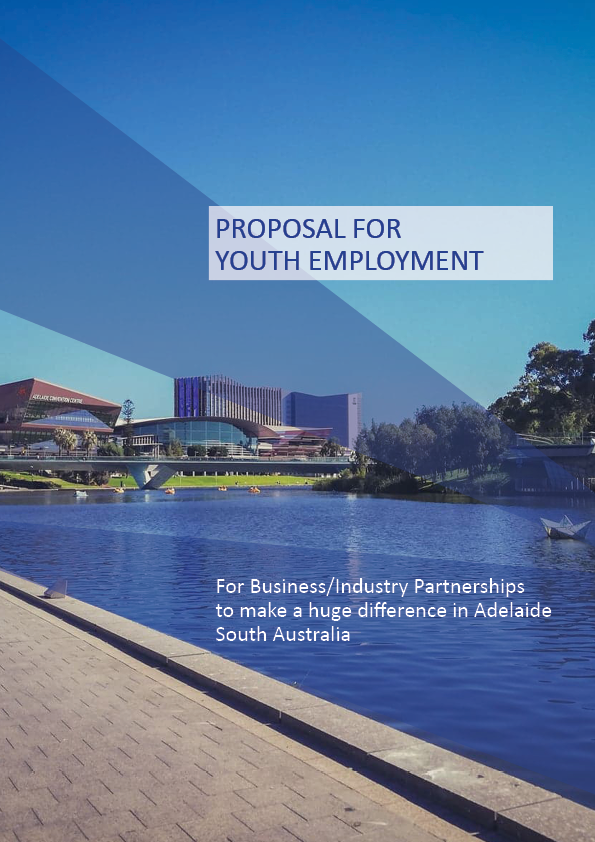 We are seeking partners to invest in our proven work so more vulnerable young people can overcome their fears and barriers to success. Together, we can give them hope for a productive future to employment. This is based on our combined 12 years’ experience and effective advocacy to achieve placements for a good start to responsible adulthood, an opportunity they would not have had otherwise.

To read the full proposal follow the link Proposal for Youth Employment.